You are here:Home»iPhone»Calling»Should I Enable Wi-Fi Calling On My iPhone? Yes! Here’s Why.

What Is Wi-Fi Calling?

Wi-Fi calling uses your Wi-Fi connection to make phone calls over the internet, instead of the network of cell towers maintained by your wireless carrier.

In the next section, I explain the road we took to get from cellular phone calls to Wi-Fi calling, and how much the technology behind phone calls has changed in just a few years. It’s interesting to me, but I won’t be offended if you want to skip right to the section about how to set up Wi-Fi calling on your iPhone. 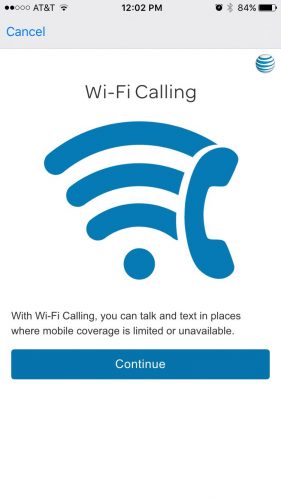 The Steps That Led To Wi-Fi Calling

When I sold iPhones for Apple, I used to tell customers, “Phone calls and your wireless data connection to the internet are completely separate. They use different antennas and connect on different frequencies.”

And that’s no longer true.

The technology behind making phone calls didn’t change for years because it didn’t have to. People were using more and more data, not making more phone calls, so wireless carriers focused on the quality of the internet connection.

Think about it. All of the wireless carrier TV commercials for the last several years have focused around one theme: Faster, more reliable internet. The wireless carriers sell you on what they’re pouring money into.

Why didn’t people stop and say, “Hey, the voice quality on my iPhone stinks!” It wasn’t just iPhones – it was every mobile phone. For years, we’ve been streaming CD-quality music on our iPhones. So why do our loved ones’ voices sound like they’re coming through an AM radio?

Apple released FaceTime Audio in 2013, which for the first time gave iPhone users the ability to choose how they wanted to make voice-only calls in the Phone app. They could use the network of cell towers (called Voice Call in the Phone app) or use their Wi-Fi or cellular data connection to make phone calls over the internet, a feature that Apple called FaceTime Audio.

Apple certainly wasn’t the first one to do this. Skype, Cisco, and plenty of other companies had been using the internet to make high-quality phone calls for years, but none of them could do what Apple did: They put the old technology and the new technology side-by-side, and people were astounded by the difference.

Anyone who’s ever made a FaceTime Audio phone call realizes one thing right away: The phone calls sound much better.

But FaceTime Audio isn’t without its flaws. It only works between Apple devices, it’s buggy and calls often break up, and it uses your cellular data connection if you’re not on Wi-Fi, which can eat through your cellular data plan.

The First Major Step: LTE Voice (or HD Voice, or Advanced Calling, or Voice Over LTE) 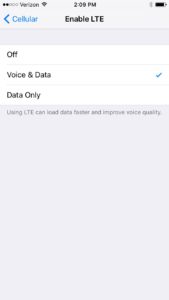 It’s important to note that Apple, AT&T, and Verizon haven’t been able to agree on what to call this technology. Apple calls it Voice over LTE (or VoLTE), AT&T calls it HD Voice, and Verizon calls it either Advanced Calling or HD Voice. No matter which term you see, they all mean the same thing.

I remember the first time I spoke with my friend David Brooke using LTE Voice. Again, the difference in call-quality was astounding. He had just purchased a new Samsung Galaxy, and my iPhone 6 was only a few months old. It sounded like we were standing in the same room. And we hadn’t done anything special – it just worked.

You may have experienced this too. If the phone calls you make to some people are crystal-clear and others aren’t, now you know why: You’re talking with other people using LTE Voice.

LTE voice sounds so much better than traditional cellular technology because it uses the technology that wireless carriers have been upgrading for the last several years: Your iPhone’s connection to the internet.

LTE voice came with one major shortcoming: Its lack of coverage. Even though LTE coverage has expanded significantly over the past few years, it is still not as widely-available as 3G and the older data networks. Unless both parties are in area with LTE voice coverage, phone calls connect using the traditional cellular network.

Wi-Fi Calling extends the coverage area of LTE Voice by including Wi-Fi networks. Remember, LTE Voice improves call quality by using your iPhone’s internet connection to make phone calls, instead of the traditional cellular voice network. Since Wi-Fi also connects your iPhone to the internet, it’s a logical next step for LTE and Wi-Fi to work together.

With Wi-Fi calling turned on, every Wi-Fi network your iPhone connects to acts like a mini cell tower. Wi-Fi calling allows you to make high-quality phone calls to people with LTE data coverage or who are connected to a Wi-Fi network.

This is especially good news for people who have poor cellular reception at home. If they have Wi-Fi, they can bypass the cellular network and make phone calls using their Wi-Fi internet connection, as long as the other party is connected to Wi-Fi or LTE, too.

How To Set Up Wi-Fi Calling On iPhone

When Wi-Fi calling becomes available on your iPhone, a pop-up appears that says “Enable Wi-Fi Calling?”, and you’ll be able to choose Cancel or Enable. The blurb underneath the title makes two main points: 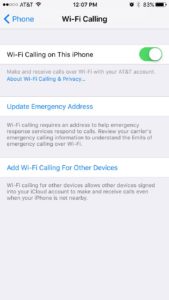 You can also turn on Wi-Fi calling at any time by going to Settings -> Phone -> Wi-Fi Calling and tapping the switch next to Wi-Fi Calling On This iPhone.

When you set up Wi-Fi calling for the first time, you’ll be greeted by a screen that says, “With Wi-Fi Calling, you can talk and text in places where mobile coverage is limited or unavailable.” Tap Continue.

Wi-Fi Calling: What You Need To Know

Next, you’re greeted by the fine print. I’ve distilled it into these main points:

If you’re having trouble sleeping, here are screenshots of the fine print: 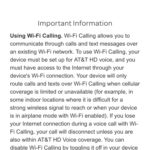 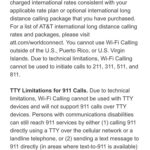 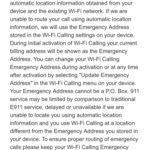 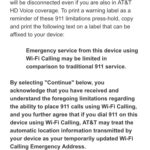 Last Step: Setting Up Your 911 Address

Remember, if your iPhone can send your location using GPS or another form of automatic location services, it will always do that before it sends the address you set here. 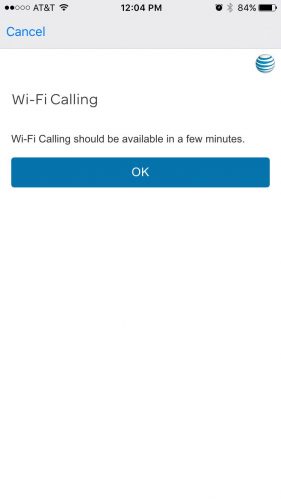 After you finish the section on setting up your 911 Address, you’ll see a message that says “Wi-Fi Calling should be available in a few minutes.” You’re good to go!

Thanks so much for reading, and remember to Pay It Forward,
David P.

OK but the problem seems to be that with wifi calling enabled you can’t make regular cellular calls or text messages when you are away from a wifi connect. So you have to remember to disable it and enable it constantly. I thought it would automatically just put the text or call thru but it doesn’t until you turn off wifi calling. Or am I mistaken and if so how do I get this to work. IOS 14.7 on an iphone SE.

Hey Fred, What you’re describing isn’t the way Wi-Fi calling is supposed to work. You should never have to turn it off once it’s on, even if you’re not connected to Wi-Fi. Can you imagine the hassle? ? In any case, go ahead and leave it on. If you’re not receiving phone calls, I would recommend turning off Wi-Fi calling, then go to Settings -> General -> Reset -> Reset Network Settings to reset the carrier-related settings on your iPhone, and then turn Wi-Fi calling back on. If it works like it should, you’re good to go! Just make sure… Read more »

Hi I cannot be heard when I call on whattsapp on my iPhone. What can I do?

I would be a much bigger fan of wifi calling if it didn’t feel a need to incesantly notify me (sometimes, not as much as before) about what wifi calling is. I know what wifi calling is, you’ve told me over and over again. And there’s no way to turn that notification off except rooting my phone to gain superuser access. I will turn on WiFi and wifi calling when I want to use it and no other time, not when you tell me. I will not succumb to your hints and attempts to get me to keep them on… Read more »

Could you please tell us if we should turn this on or off. It is under the question WiFi calling on this iphone
the statement reads “ prefer WiFi while Roaming
thank you

David, why does wi-if calling keep un-enabling on my I iPhone?

Great info. Thanks for sharing.

Thanks for explaining what the WI-FI calling is. I just stumbled across it in my 7plus Ive had for year now…Im not sure how Ive never seen it before. I turned it in but wasnt sure what it actually was. Now after reading your article I cant wait to hear the difference its going to make. I have terrible signal at my home so I hope this fixes that problem of having horrible reception on calls.

Got a message on my phone and accordingly set up wifi calling before I found this page to be sure I was doing th right thing. Reassuring and informative. Thanks!

Thanks for the detailed explanation. It gave me the confidence that wifi calling is a good thing.
One thing-It may not be secure regarding possible “data stored on your phone” (i.e. Credit card info plus the phone call itself) type breaches when using it in a Starbucks for example. This was not mentioned in the article and I think needs to be highlighted…..

If I enable wifi calling, and then make a phone call while not connected to wifi (but connected to LTE), will I be using up data from my data plan?

Good question! The answer is no – calls you make over Wi-Fi or Voice over LTE are billed separately from your data plan, even though they technically use data. The carriers can tell the difference!

David, I travel to Canada a lot. I hoped that WiFi calling would allow me to talk when I could find a wireless network without incurring international roaming charges. Looks like that is not the case! Should I continue to use Apple’s FaceTime Audio when I am north of the border? Steve

Dear David, I have an Iphone 7 with Australian Telstra account. I live and work overseas. Will my calls back to Australia be charged if I am using a WiFi network from the country I am working in? Please advise. Thank you, Chris

I read your article and then signed up for Wi-Fi calling. But after I finished, including setting up my 911 address I didn’t get the message: “Wi-Fi Calling should be available in a few minutes.” How long do I have to wait? Will I pay extra for Wi-Fi calls besides my regular bill from AT&T, my carrier?

I did not mean to answer Chris Pereira but to ask David Payette a question. Sorry.