You are here:Home»iPhone»What Are Cellular and Data Roaming On iPhone? On or Off?

You’ve had your iPhone for a few weeks and you notice “Cellular” as you’re perusing through the Settings app. You’re alarmed when you notice Cellular Data and Data Roaming are both turned on. If you’re still reeling from the roaming charges on your phone bill in 1999, you’re not alone. We’re all due for some up-to-date information about what roaming means for iPhones today. In this article, I’ll explain how cellular data works, what data roaming means on your iPhone, and share some tips so you don’t get burned by data overage charges.

What’s Cellular Data On My iPhone?

Where Do I Find Cellular Data? 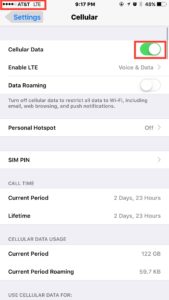 It’s absolutely OK to turn off Cellular Data if you have a minuscule data plan or you don’t need internet when you’re not at home. When Cellular Data is off and you’re not connected to Wi-Fi, you can only use your iPhone to make phone calls and send text messages (but not iMessages, which use data). It’s amazing that almost everything we do on our iPhones uses data!

Let’s dive a little deeper into LTE. LTE stands for Long Term Evolution and it’s the latest and greatest in wireless data technology. In some cases, LTE can be even faster than your Wi-Fi at home. To see if your iPhone is using LTE, go to Settings -> Cellular -> Enable LTE. 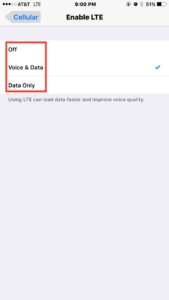 This setting turns off LTE so your iPhone uses a slower data connection, like 4G or 3G. If you have a small data plan and you want to avoid overage charges, you may want to choose Off.

As I said before, our iPhones use a data connection for a lot of what we do. Nowadays, even your phone calls can use LTE to make your voice sound crystal-clear.

Data Only enables LTE for your iPhone’s connection to the internet, email, and other apps, but doesn’t enable LTE for voice calls. You’ll only want to choose Data Only if you’re having trouble making phone calls with LTE.

Do LTE Voice Calls Use My Data Plan?

Surprisingly, they don’t. At the time of this writing, Verizon and AT&T are the only wireless carriers that use LTE for phone calls, and both of them don’t count LTE voice as part of your data plan. There are rumors that T-Mobile will add voice over LTE (or VoLTE) to its lineup in the near future.

HD Voice from AT&T and Advanced Calling from Verizon are fancy names for what your iPhone calls Voice LTE. The difference between LTE Voice and regular cellular phone calls is staggering – you’ll know the first time you hear it.

You’ve probably heard the term “roaming” before and cringed. Nobody wants to take out a second mortgage to pay their phone bill.

What’s “Roaming” on My iPhone?

When you “roam,” your iPhone connects to towers that aren’t owned or operated by your wireless carrier (Verizon, AT&T, Sprint, T-Mobile etc.). To access Data Roaming on your iPhone, go to Settings -> Cellular -> Data Roaming. 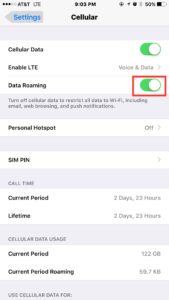 Have no fear: Data roaming has no effect on your phone bill when you’re anywhere in the United States. I remember when it used to, but several years ago the wireless providers agreed to do away with roaming charges for good. That was a big relief for a lot of people.

This is important: Roaming charges can be exorbitantly high when you’re traveling abroad. Verizon, AT&T, and Sprint charge a lot of money if you use their data when you’re overseas. Keep in mind that your iPhone constantly uses data to check your email, update your Facebook feed, and do a slew of other things, even when you’re not using it.

If you really want to be safe, I recommend turning off Cellular Data entirely when you’re traveling abroad. You’ll still be able to send photos and check your email when you’re on Wi-Fi, and you won’t be surprised by a massive phone bill when you get home.

We covered a lot in this article. I hope my explanation of cellular data and data roaming on iPhone helps you feel a little more at ease when you use your wireless data connection. We talked about how to turn Cellular Data on and off and how LTE voice makes your voice calls crystal-clear. I’d like to hear your thoughts in the comments section below, and if you’re interested in learning more, check out Payette Forward’s article about what uses data on your iPhone.

I am Chris Pirone, I am a contributing writer here at Payette Forward. I have always been interested in technology since I was a kid. I started a career in technology when I landed a sales and service position at a corporate AT&T store. Since then, I have shifted my focus to social media and digital marketing, but I still stay very active and interested in the technology world. Me writing for Payette Forward was a no brainer because I enjoy talking about technology and helping people learn how to use it.

Thank you for an explanation of the cellular and wifi positions 🎓

Thank you for these clarifications, Very helpful even from when this was written in 2015 to today in 2021! 🙂

I’m glad that we were able to help you out! 😊

My phone currently only has WiFi . Thank you for this explanation.

VG thanks. I have iPhone X so some things a bit different which could maybe be covered.

This was easy to understand & helpful. Excellent explanation written in 2015 – still useful in 2021!

Thank you for posting this. I just found data roaming on my settings and honestly had no clue what it was. I actually get it now. I read a few other explanations elsewhere and they weren’t very helpful.

Hey Chris Pirone, You are goodness in bringing forward this information. You have given us
great help, I am older and easily scared of tech. We turned on Roaming to improve our bad ATT reception in our home. That worked, improved reception, Fear, will I get billed for roaming? I know the answer thanks to you. You have paid it forwarded and I will too. Jim Kirkpatrick

Well said! I feel the same 🙂

This was so clear it brought an immediate BIG smile to my face. Thanks, man!

Thank you, this was just the info I needed 🙂

Thank you for your explanations I needed help and this info is great.

When travelling abroad, with cellular data turned off, will apps lke UBER and LYFT ork?

Bless you for your excellent explanation of cellular data etc. I have a new iphone and now understand how to access the internet when not connected to it. You really made it clear to me–even though I usually have no idea about how this stuff works.

I.am grateful to you for your article that helped me understand so many aspect of the iPhone usage regarding roaming and all that it includes. I will definitely visit the Payette site. Thank you again.

what does voice only mean when roaming

Thank you for the info!

I have doent hours in the phone with AT&T and Apple since my personal hotspot wick connecting to any devices. AT&T has verified that I have personal hotspot on my plan. We did lots of resets and nothing helped. Are there any settings on my phone to check for. Data roaming is turned off. Should it be turned on?

Oh my! Thank you so very much. Your explanation was crystal-clear

Thank you so much ! Great info

Thank you! Youve been able to explain to me what ATT cannot.

I have had data explained to me 5 times but was still mystified. Now I finally understand it. Thanks so much.

Now I know! I’ve never been able to understand how others can use there iPhone when mine won’t connect. This information is of great value to me. THANKS!

Very clear explanation about roaming, now I know what to do abroad. Thanks a lot.

Has been great to learn sooo much in easy understandable english. ThankYou!

thankyou sooooo much for the clear and concise explanation of the “data, roaming, cellular, LTE, ” questions I have so often.

Thank you for the valuable information, I don’t fully understand what I’d like too, bookmarking your page sooner or later I’m sure I will. Appreciate it a lot.

You might want to say “if you have a US plan, data romaing will not cost extra in the US” … I’m from Canada, and farily certain that I’ll be charged a fortune when I visit the States!

I learned a lot, I didnt even understand all about cellular data & everything about it. Thanks for the good explanation.

Thank you Chris for the excellent up to date conscise explanation! 🙂

If Cellular data is on, yet, Data Roaming is off, will I still incur data charges

So should I turn both my LTE & Roaming off when I’m not in the States?

Thank you so much for the great information

Okay so if I have a to go plan with AT&T I pay $60/mo, but once I have used my 8gb of high speed and travel to Mexico, will my roaming data still work since internet should be “Unlimited.”

Note that if you have iOS 9 and any Microsoft Exhance ActiveSync email accounts setup on your device, they may use LTE even if you disable cellular for Mail and Contacts. iOS 9 may also use cellular data for various functions even when you are connected to WIFI data. These are both documented on Apples website.

To follow-up She didn’t spend much time on the videos, so how can she use so much data?

Thank you for the information. We are new users to the I-Phone 5S, and I noticed that my lady has over 200 MB already used while I have only 18 on my line. She got most of it from I-Tunes. Are the videos she is watching contributing to this high data usage? I also thought that if you are using Wi-fi that it reduces the MB usage-even with videos. Thanks for your help.

Reply
My iPhone Says No Service. Here's The Real Fix!

[…] they used to. If you’re interested, one of our writers wrote an article that explains how voice and data roaming works today. A word of warning: It’s a good idea to turn off Voice Roaming when you’re traveling […]