You are here:Home»Apple Watch»My Apple Watch Won’t Turn On! Here’s The Real Fix.

Your Apple Watch isn’t turning on and you don’t know why. You’re pressing and holding the Side button, but nothing is happening! In this article, I’ll explain why your Apple Watch won’t turn on and show you how to fix this problem for good.

The first thing to do when your Apple Watch won’t turn on is perform a hard reset. Simultaneously press and hold the Digital Crown and the Side button for about 10-15 seconds. When the Apple logo appears on your Apple Watch, release both buttons. Your Apple Watch will turn back on shortly after.

Note: Sometimes, you may have to hold both buttons for 20 seconds or longer! 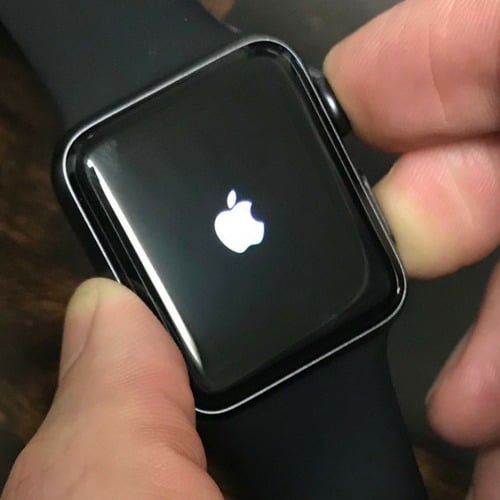 When new people get their first Apple Watch, they’ll sometimes put it in Power Reserve mode and think that their Apple Watch isn’t turning on. When I first got my Apple Watch, I was toying around with this feature and thought the same thing!

Power Reserve is a feature that extends your Apple Watch’s battery life by disabling all of its other features except for the current time. You’ll know Power Reserve is turned on if it looks like the image below: 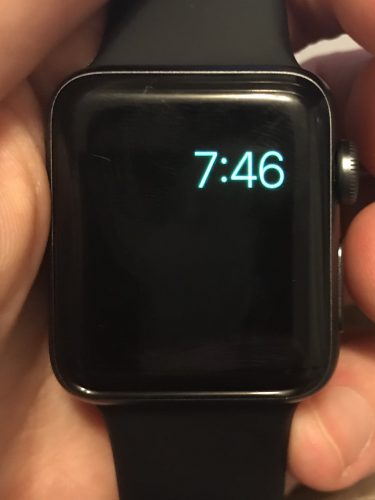 Turn Off VoiceOver and Screen Curtain

To turn off Screen Curtain, open the Watch app on your iPhone and tap General -> Accessibility -> VoiceOver. Then, turn off the switch next to Screen Curtain. You’ll know the switch is off when it’s positioned to the left.

Screen Curtain only turns on when VoiceOver is turned on. If you don’t use or need VoiceOver, I’d recommend turning it off as well to prevent Screen Curtain from turning on again.

To turn off VoiceOver, go back to the Watch app on your iPhone and tap General -> Accessibility -> VoiceOver. Then, turn off switch next to VoiceOver at the top of the screen. 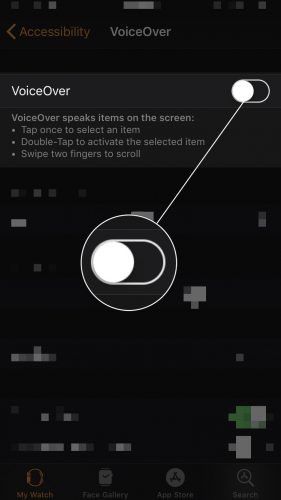 If there’s an issue with your Apple Watch’s magnetic charging cable, you may be able to get it replaced for free if your Apple Watch is covered by AppleCare+. Take it into your local Apple Store and see if they’ll replace it for you.

If none of your charging cables or chargers are working, take a look at my article on what to do when your Apple Watch won’t charge.

If your Apple Watch still isn’t turning on, there may be a hardware issue causing the problem. A lot of the time, Apple Watches stop turning on after being dropped or exposed to water.

But I Thought My Apple Watch Was Waterproof?

If you believe there’s a hardware problem with your Apple Watch, set up an appointment at your local Apple Store and have them take a look at it.

Your Apple Watch Is Turning On!

Previous ArticleApple Watch Not Charging? Here’s The Real Fix!
Next Article Why Does The iPhone X Have A Notch? Here’s The Truth!

My Apple Watch 3 is stuck on the “Reset” screen. If I press Cancel, it goes to the Apple logo screen and the Reset option comes up again. If I press Reset, it begins to reset. The circular bars appear on the rim and quickly complete a circle, followed by the Apple logo. Then, the bars reappear and start sweeping the face slowly. This time, when the bars reach 4 O’clock position, it goes back to the reset option screen. The problem started after I accidentally pressed the crown and side button numerous times while attempting to remove my sport… Read more »

If my watch feels hot and I never see the Apple logo, could it be the battery? I also tried pressing the button for more than 30 seconds. Please help!

My Apple Watch hasn’t been charged for a minute. I put it on the charger and it still hasn’t turned on.

I do a walking workout where I usually walk 3-4 miles. Today I walked 4.13 miles. Closed the workout
and by the time I got home my watch said I walked 10.1 miles

Hi Clarence, that sounds like it could be a hardware issue. I’d recommend reaching out to Apple Support directly to find out what your repair options are. If you go to the Apple Store, make sure to bring your iPhone, Apple Watch, and Apple Watch charger with you for the diagnosis. Sorry we couldn’t be of more help, best of luck getting this issue resolved!

Hi Sharon, that sounds like it might be a hardware problem. I’d recommend going directly to an Apple technician to try to get this error diagnosed. Sorry we couldn’t be of more help, best of luck!

Nothing has worked! Apple symbol shows , goes dark then a lacy circular design appears with a tiny apply inside. Printed around this design are the words “38MM aluminum case designed by apple in California”. When on the charger, it shows watch is completely charges.

This sounds like it could be a hardware malfunction. Can you think of any recent occasions where your Apple Watch might have been damaged before this problem arose?

I have the same issue. Were you able to fix your iWatch?

I’m still having trouble getting out of power saver

Thanks for the tip , i I had to hold the buttons down for a while , but it turned back on .?

It does tend to take a while. I’m glad this was helpful for you! ?

Thanks David. My Apple 6 watch would not turn on. Your hard-set suggestion worked a treat.

None of these helped. I even took my watch in and they put a new battery in and said everything looked perfect so he has no idea what the problem is. It just won’t turn in.

Mine will show apple logo for a few moments and then off it goes again!

Mine too. How did you fix it eventually? Pls help.

If you’ve tried all the steps in this article and your watch is still unresponsive, you should reach out to Apple for a replacement watch.

Same; were you all able to fix it?

How did you get it fixed? I’ve been getting this issue for 2 days already and my watch is no longer covered by warranty.

Thank you so much!

Did you get it going ?

Same… just happened to me 🙁

Why can’t I gey watch to charge or turn on

My apple watch series 1 will not charge or come on now what?

my Apple Watch series 1 stopped coming on or charging. We changed the battery & it will only show the Apple logo during a reset but will never come on. Tested charging cord & it is working. Please help. I haven’t used it in almost 2 years other than a day here or there but need to use it for my health condition now. Thanks in advance. We even got another battery from the seller but still doing the same thing with the second new battery

this crazy and weird at the same time because i am having the same problem. Mine is series one and today i just decided to bring it back out after like a year because i need it tomorrow to work out for basic training. /: it’s a black screen and it won’t charge or turn on.

I have the exactly the same problem! the funny thing is I chatted with apple support today and told me to buy a new one!!!

My Apple Watch series 4 won’t turn back on and is looping with the Apple logo. How can I get my watch back on? Thanks so much in advance.

i just got an apple watch from my dad and it only has the apple symbol when charging then i take it off the charger and nothing happens. its been charging for 3 hours. can i fix this

That’s exactly what mine does. I can’t find a fix for it.

Any luck with fixing it? I am having the same issue? Thsnks

My issue with apple watch 4 cellular started 4 days back immediately the power went off , i recharged with different connections like changing cable , via car port, via laptop and portable charger .Checked with pressing the two side buttons other than a red and green loop coming nothing happened -pls help

Hi. Did you get it fixed yet?

I got the orange circle ? with the I!

I have the Apple Watch series 1 and was working perfectly until yesterday that I did the software update and went off .. I can’t turn it on.. I have been trying all day n nothing… what happened?!.. can it be fixed?!

My apple watch is getting really hot while on the charger. I only leave it on there for a short amount of time. The watch has a black screen. It was working the other day when I went on a float trip. I was able to do as instructed when around water. I then shut it off and put it away to save what battery was left. The next morning it would not turn on. It won’t even show the lightning bolts when I have it on the charger and it is still getting really hot to the touch.

Hi! I am having the same problem. I dropped my watch in the water and ever since then it wont turn on or show the apple logo…My watch is the series 3. But i put it in rice and put it on the charger but it will not turn on. But it is really hot. I tried the reset where you hold the two side buttons but that did not work either. There is also a slight blue tint on all off the corners.

Yep, same problem as you? Did you find a fix?

Same problem as Justice, did you find a remedy? Or is it just dead?

I have a series 3 watch. Went into a pool with my watch on for the first time (my watch has only touched water when I wash my hands or do the dishes). At first, the screen was black then went to the enter passcode screen, but every time i tried to enter my passcode it would delete the number I pressed, then it turned off and never came back on. Stuck my watch in rice for over 24 hours, nothing. Tried the steps above and still wont turn on. Tried charging it, it would get hot but never turn… Read more »

Hi! Tonight, I was turning off my Apple watch to go to sleep (power reserve) and then i realised that i didnt do something so i tried to turn it back on and all i can see is the apple logo. when i pressed the two buttons down to turn it on the alert thing came on and i followed the instructions on apple but nothings working. i just got it today too! it was on for like three minutes and i put on the factory reset and nothing has happened still. ive tried plugging it in too. what should… Read more »

Let it charge and see if it will turn on again after a while. If not, your model might be defective and you might want to take it back to the store to have it looked at. It’s very rare, but sometimes products ship with defects that weren’t caught at the factory. If it’s broken they will be more than willing to replace it.

It worked!!! Thank you

Check out our other article if your Apple Watch won’t charge. It might help you fix the problem!

Thx for the tip now shes back in working order.

nice job you saved me headache and a road trip,friends. Thanks for taking the extras time it took to do this…….Awesome!

Thank you so much for this.

I did the hard reset for 20secs and still havent turned back on. Thank you though

Thank you for this! I thought I was going to have to drive 1.5 hours to the Apple store!