You are here:Home»iPhone»iPhone: Leave This Conversation Grayed Out or Missing? The Fix!

You’re in a group text message or iMessage conversation and you want out. You like your friends, but they’re blowing up your iPhone and enough is enough. You tap Details in the upper right-hand corner of the Messages app, scroll down, and Leave this Conversation is grayed out or missing. In this article, I’ll explain how Leave this Conversation works, why it’s missing or grayed out, and how to get out of a group text message or iMessage conversation on your iPhone. 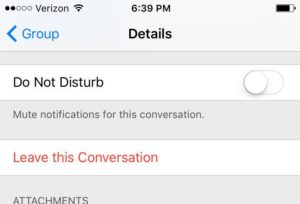 If you’re wondering where to look for Leave this Conversation, open the Messages app, open any group message, tap Details in the upper right-hand corner, and scroll down.

Up until very recently, all of the “group texts” we’ve participated in have used the text messaging plan we purchase through our wireless carriers to send and receive messages. Apple recently introduced iMessage conversations, which are group messages that use Apple’s iMessage technology instead of your text messaging plan.

Check out my article about the big difference between iMessages and text messages if you’d like to learn why using iMessage for group texting is an important step forward.

Why Hasn’t There Been A “Leave This Conversation” Button Before?

To understand why Leave this Conversation is a new feature, it’s important to first understand the fundamental difference between group text messaging and iMessage conversations.

With group text messages, each person directly messages all the other people in the group, and each person’s iPhone keeps track of the participants in the conversation. 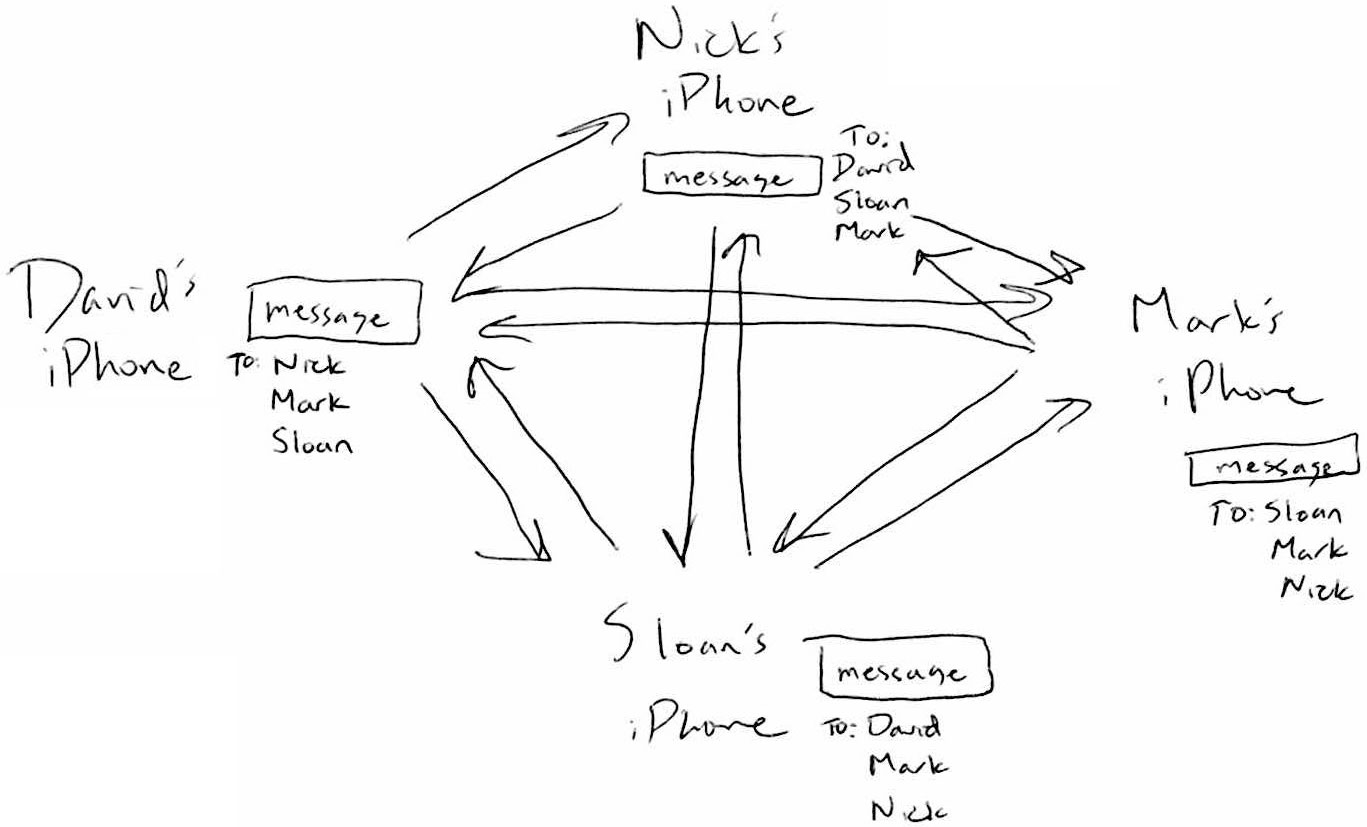 Why Is Leave My Conversation Missing? 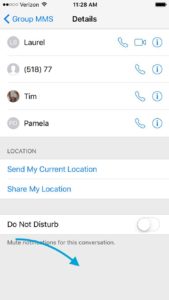 If you don’t see the Leave this Conversation button, you are in a traditional group text message, not an iMessage conversation. Group texts use your wireless carrier’s text messaging plan, and since iPhones can’t directly tell other iPhones they want to leave a conversation, leaving is not an option.

How Do I Leave A Traditional Group Text Message?

This may seem trite, but it’s the truth: Ask nicely or block the numbers. You don’t have any more control over whether you receive a group text message than you do when receiving regular text messages. If you’re really fed up, my article about how to block callers on an iPhone works for text messages too.

If Leave This Conversation Is Grayed Out

Even if you delete the entire conversation from your iPhone, you will be added back to the group the next time someone sends a message. The only way to leave a three-person iMessage conversation is to add someone else to the group so it becomes a four-person conversation: Then you can leave.

Why Can’t I Leave A Three-Person iMessage Conversation?

Bear with me: Theoretically, if you were to leave the conversation, there would be only two participants, and it would no longer be an iMessage conversation. Instead, it would be a regular two-person iMessage.

This seems like a feature that should have been introduced along with iMessage conversations, but it wasn’t. Apple programmers are undoubtedly working on this functionality now and will release it as part of a future iOS update.

When Can I Leave This Conversation?

Leave this Conversation only works if you are in an iMessage conversation with four or more participants.

Leave this Conversation is a great feature that has yet to fully mature, and it’s definitely confusing if you don’t understand how and when it works. Feel free to share your thoughts in the comment section below, and if you have any other questions, the Payette Forward Facebook Group is a great place to get help.

Thanks for reading and remember to pay it forward,
David P.

Previous ArticleWhat’s The Difference Between iMessage and Text Messages on iPhone?
Next Article Is Closing iPhone Apps A Bad Idea? No, And Here’s Why.

It’s super annoying to be unable to leave a large group text conversation just because someone in the group doesn’t have an iPhone!

I have an issue that neither a trip to the Apple Genius Bar and two trips to ATT including a new SIM can resolve. I can have a 3 and 4 way text with a person but we can not directly text or FT call each other. Works easily on my wife’s iPhone 6, but not my 11 Pro.

I left a group message while in a meeting and now I can’t get back in. They have tried to add me. We deleted the thread and started another group message. I can participate only until all people have responded then it kicks me out again and I can’t add any messages or respond. This is so frustrating! I would have never left the conversation if I knew I couldn’t get added back in. ? I have an iPhone 11 or maybe 12.

That sounds super frustrating! Unfortunately, really specific issues like this need to be solved by Apple Support because they are the ones with access to the inner working of iMessage. Go to Apple Support’s website for more help, and we wish you the best of luck!

I found out that I can’t leave a group text when not everyone is using iPhone. If someone in the group is not using an iPhone, then the leave the group feature is not available.

Thanks for the explanation.

You’ll have to ask someone in the chat to add you back into it.

Why not put that you cannot leave the group text at the top? I read through pages of information only to be told “ask nicely”? Thanks for that.

Right. There are 3 left in our group. There is a disagreement and I cant leave. One person has an issue with privacy so I cant add, and then…that person could not leave anyway.
Someone FIX this!!!!

PLEASE SOMEBODY FIX THIS! Don’t want in a group text and have NO control if you get put in one. Don’t want, shouldn’t have to block everybody. STUPID! Ready to smash phone in into a million bits, but, I use it for work.

Thanks David for explaining why Leave The Conversation is grayed out. I totally get it after reading your explanation. 3 way texts cannot use this feature!

My mother-in-law is in a 16 person group text and the “leave this conversation” option is not there. She has the iphone 10. You think this would be fixed by now.

Thank you for explaining this but what a stupid thing for Apple to do. Ive had to add someone I dont remember who it is to a messed up conversation about cliff richard and Michael Jackson with my partner and his deranged cousin just so I can leave the group. Sorry Alison whoever you are.

I feel like I just made her watch my copied ring video!

Androids have had the ability to uncheck the group button for years. Will apple ever catch up to the last decade?

Thanks for the explanation. So frustrating being held captive by conversations you never wanted to be a part of and having your phone going off with peoples comments you dont even know in never ending comments days on end! Ugh!

Doesn’t work for me, have an iPhone 8 with iOS 12.1 and the leave conversation is not available and I have 7 people in this conversation.
How do I leave?

This was soooo helpful. thank you for sharing it with us.

This is f***ed up. I have to block every person on a regular group text so l wont get bother … the f***ing smart phone is not that smart after all.

! Button only allows me to compose new message and does not mean details anymore. So how do I leave group ? This happens with iPhone 8 & also the iPhone 6 Plus? Please help bc have spent 30 minutes trying to find answer

I am bothered at work phone goes off some useless convo. I have an iPhone 7 Plus and not being able to leave a conversation is not very convenient for the tec no this phone displays. Bay move APPLE!

Thank you for your non- techy explanation. Appreciate the info. Look forward to a future enhancement to manage this behind the scenes.

thanks for the info…however, I used to have the “blue” imessage icon but for some reason it has gone to “green” text message and now I cant get it back to imessage…all the rest of my phone is “blue” except this group which we use all the time…help please

you definitely need to fix THIS FEATURE 3 people are a GROUP!!!!! I want out and I can’t just randomly add someone to this messy convo! reallly? This is APPLE

You shouldnt be forced to be in a group messages

First article about iPhone usage that I have read that fully made sense and wasnt outdated or an apple geek speak. Thank you however I do have one question, even though I know I am part of a group regular text message and not an iMessage group because we have no power and no Wi-Fi instead of group MMS Or group it says 10 people and if I click on that it shows all the 10 people that are part of it. Is the display under the clock different now?

The three person convo is the dumbest thing Ive heard in a while. Ive no doubt its true but gosh do you add some hapless person to the convo so you can leave, and then they cant leave! LoL Apple what is wrong with you??

This is a terrible application. I am being driven mad by all the trivial conversations in my small groups.
I hope apple fix it quickly.

All the answer I needed was on the bottom. “Can not leave if there’s only 3 ppl in a group” it is NOT a fix, it was an explanation. So there is NO fix…

my question is can other participants in the Imessage group know when you leave the conversation? this is just general curiosity.

Good info–thank you. I am in a traditioal group family msg–I like being in it but when I reply it will not deliever. Don’t eant to leave. Also–when some family members reply, their msg shows up on a different family group. Frustrating.

Thanks heaps, that was driving me nuts!

thanks much, this helps a bunch. Instructions are so difficult to write. I presume that if group includes non i phone users, then you are in a regular text messge and can’t leave either. and BTW, i have i phone 7 and under the clock in an open message trail, i don’t see group or group mms. i see the bubbles of the folks i’m texting with

Well done! You knew exactly when the exasperation hit and the drawings helped. Very thorough, thank you!

I have been added to a group message that is inappropriate. I’ve been deleting each message and blocking each number it. I can’t leave the group and never signed up for it. Help!