You are here:Home»iPhone»Messages»iPhone Messages in iOS 10: How To Send Effects and Reactions

You’re sending a happy birthday iMessage to your best friend on your iPhone, but sending a plain text message is just too dull for your taste. Luckily, the new iPhone Messages app has added Bubble and Screen effects — a way for you to spice up your messages by adding special effects. Additionally, Apple has added message reactions which is a new way to quickly respond to texts.

These new features are built-in to the new Messages app but are hidden behind other buttons. In this article I will show you how to use message effects and reactions in the Messages app on your iPhone, iPad, and iPod.

You’ve probably noticed that there’s a new, upwards facing arrow in the Messages app where the Send button used to be. The only functionality difference with the new send button is the addition of Bubble and Screen effects.

How Do I Send A Regular iMessage In The Messages App On My iPhone?

How Do I Send A Message With A Bubble Or Screen Effect On My iPhone?

To send an iMessage with a Bubble or Screen effect, press and hold the send arrow until the Send with effect menu appears, and then let go. Use your finger to select which effect you’d like to use, and then tap the send arrow next to the effect to send your message. You can switch between Bubble and Screen effects by tapping Bubble or Screen under Send with effect at the top of the screen.

Essentially, these effects add emotion to your text messages by giving it a visual effect when delivered to a friend’s iPhone by animating your screen or text bubble. 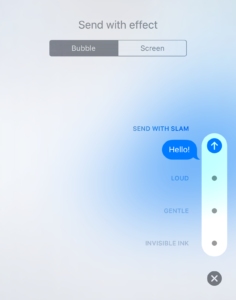 As discussed earlier, Messages for also introduced message reactions. Even though these effects aren’t as drastic as Bubble and Screen effects, reactions let’s you quickly respond to a friend’s message without sending a complete text message.

To react to a message, double tap on a message you’ve been sent and you’ll see six icons appear: A heart, thumbs up, thumbs down, laughter, two exclamation points, and a question mark. Tap on one of these and the icon will be appended to the message for both parties to see.

That’s all there is to message effects and reactions in the new iPhone Messages app in iOS 10. Even though these features are quirky, I think they make messaging friends and family a lot more fun. Do you find yourself using Bubble or Screen effects when sending messages? Let me know in the comments.

Previous ArticleHow Do I Share My Location On iPhone? The Simple Guide.
Next Article How Do I Use Bedtime In The Clock App On My iPhone? The Guide.

I'm Andrew Kunesh, a technology writer and IT professional from Chicago. My goal is to help you fix the many errors and problems your Apple devices may face. Thanks for checking out our work!

question: I’m in a group text and every time I react to a text with one of those icons , the text message is written out again Adding that I “ liked “ it.

Since you’re in a group chat with Android users (not an iMessage group chat), their phones don’t support the same “thumbs up” and other icons that iPhones do. It’s the only way they’d know you gave it a thumbs up, so the iPhone sends that text automatically. If you’re in an all-iMessage group chat, the thumbs up will work and no text will be sent. I usually just use the emoji thumbs up sign in those situations.

I’m sorry but this stuff has its place on a kids phone but for adults? This is a dumbing down of commumication. It’s like adding a laugh track to a movie. Or sound effects like a klaxon, a whoopee whistle to ‘add emotion’ to a story.
Is there an option to add violins to condolences?

Or maybe the latest U2 album? If there’s one thing it’s clear Apple users like is the backend control to turn things off. Choice.

I have a 5s and I can’t get them to go through. It does it for me when I select it, but to whom I’m sending the message to (another 5s) there’s nothing but the regular message. I turned my motion control off. Not sure why it won’t work.