You are here:Home»iPhone»Uninstalled Apps Are Using Data On My iPhone! (No They’re Not.)

You’re scrolling through Settings -> Cellular to determine which apps are using the most data on your iPhone, and you run across something unexpected at the bottom of the list: The apps you’ve already uninstalled are still using your cellular data! How is that even possible? Fortunately, it isn’t — and they’re not.

In this article, I’ll clear up the confusion about why it looks like uninstalled apps are still using data on your iPhone, so you can rest easy in the knowledge that your apps haven’t come back to use your data from beyond the grave.

First, Understand What Settings -> Cellular Is Actually For

The Cellular section of Settings is designed to give you an accurate idea of how much data you’ve used since you last reset the statistics. If you’re burning through your data plan and you don’t know why, this list can be a lifesaver. 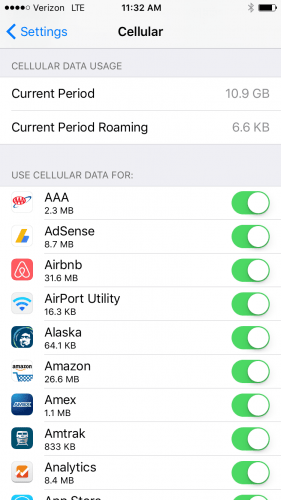 Imagine this scenario: Last month, you went way over your cellular data limit. You found my article about what uses cellular data on iPhones and you’re scrolling through the list of apps in Settings -> Cellular.

As you reach the bottom of the list, you notice that Uninstalled Apps have been using data too — but here’s what really happened:

Two weeks ago, you uninstalled the Yelp app. That app had used 23.1 MB (megabytes) of data between the time you reset the statistics and the time you deleted the app.

If the data the Yelp app used before you deleted it vanished from Settings -> Cellular when you deleted it, the total amount of cellular data your iPhone had used would be inaccurate. To keep the correct total, your iPhone added Yelp’s 23.1 MB of data to Uninstalled Apps.

Uninstalled apps aren’t using data on your iPhone. “Uninstalled Apps” is the sum total amount of data that apps you’ve uninstalled from your iPhone have used since the last time you tapped Reset Statistics.

Before we uninstall it, the Yelp app has used 23.1 MB of cellular data, and the total amount of data apps I’ve previously uninstalled have used is 49.7 MB. 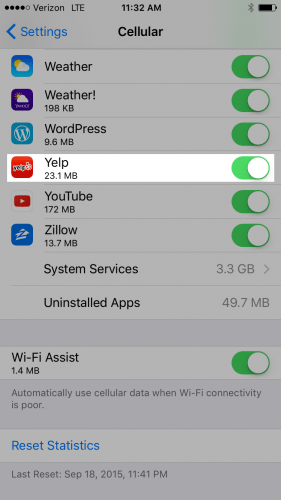 I delete the Yelp app and head back to Settings -> Cellular. I notice two things right away: The Yelp app has disappeared, and Uninstalled Apps has increased to 74.6 MB.

When we uninstalled the Yelp app, we should have ended up with a total of 72.8 MB in Uninstalled Apps. The extra 1.8 MB means that the Yelp app was responsible for 1.8 MB data in the section called System Services, which it probably used while determining my location. 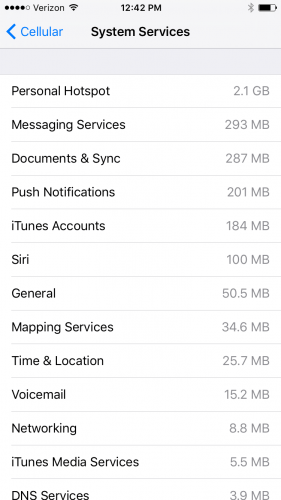 Do Uninstalled Apps Use Memory On My iPhone?

No. The list of apps you see in Settings -> Cellular only shows the amount of data each app has sent and received between your iPhone and your wireless carrier (AT&T, Verizon, etc.).

If you want to know which apps are using memory on your iPhone, go to Settings -> General -> iPhone Storage.

Now that you’ve learned that uninstalled apps is simply the total amount of data apps used before you uninstalled them, you can rest assured that your apps aren’t using data from beyond the grave. If you’re wondering about which apps really are using data on your iPhone, check out my article called What Uses Data On iPhone?.

if it isn’t using any data in our storage why is it that when we reinstall the app all the information will still be there? And I checked the actual apple website and an actual apple employee answered how to officially remove the app and it’s data.

Yeah, not true. I reset the cellular data statistics 4 days ago, haven’t uninstalled any apps and have 40kb showing up as uninstalled apps.

So, why in the hell does Apple refer to it as Uninstalled Apps? Why does one get a nice, thorough user’s manual with, say, a new Canon camera, and squat with an iPhone, iPad, or Mac?

They 100% are using cellular data. I took a screenshot of the cellular data used and the uninstalled apps were at 4,1. I closed my phone and saw a text message saying I had used 50% of my additional 1GB I requested because my daily 5 GB suddenly disappeared. So I looked at the cellular used and the uninstalled apps went from 4,1 to 4,7 while I wasn’t even using my phone. So to make things clear here they are definitely using data because if not I wouldn’t get a text message saying I’ve used all my fucking data while… Read more »

Hi David, thanks for this article. However I still have a question… in the last two days I have TWICE reset the statistics on my iPhone SE and each time I have “Uninstalled Apps” appearing under Mobile Data usage: yesterday they “used” 20.2 KB (in a 24-h period); then I reset statistics (everything went to 0.0) and today (18h later) Uninstalled Apps is back with a 0.3 KB of Mobile Data used. So what is going on? It has been more than one week since I uninstalled ANY apps on my phone. Also another question: how can you limit System… Read more »

I have the same experience I delete cellular data very often uninstalled apps keeps coming back I would love to find a way to stop this.

Hi David. DamCar65 here again. Disappointed that my post didn’t get a reply or clarification. Perhaps you no longer monitor this page? Anyway, for the benefit of others, I’ve looked into this a bit further… I have five apps I had uninstalled, so I reinstalled them / de-activate access to Mobile data / and uninstalled them again. To my surprise they STILL show up as using mobile data. Each evening I reset the data count and 24h later I again have “uninstalled apps” listed as using mobile data! Is the iPhone REALY uninstalling apps when I request it to do… Read more »

Your story is incorrect. According ATT – my phone had used 24Gb of data. On settings – the uninstalled apps had used 17.2Gb – everything else used the balance (adding up to 24Gb). ATT was CHARGING for the overages (20G plan). So…. maybe someone needs to tell ATT that the data is not really being used!

Fine info, we’re all on the same page regarding usage. I installed AdBlocker
then uninstalled it because my college
online courses app is telling me “Pop-ups must be allowed”.
My question is, How do I zap AdBlocker app, making it disappear?
Many thanks, you have relieved us all of many a headache.
Maurice Dubreuil
Student GPA 4.0 Applying for next year Financial aid. Many thanks

I have really liked the way you wrote the article. Thank you! 😀

very nive article. Already share because I was discusting that with my father earlier today… thanks for writing man…