You are here:Home»iPhone»iOS»iPhone Stuck Verifying Update? Here’s The Real Fix!

You just tried to install the latest version of iOS, but the “Verifying Update…” pop-up isn’t going away. It’s been on your screen for several minutes, but nothing is happening. In this article, I’ll explain why your iPhone is stuck verifying an update and show you how to fix this problem for good!

How Long Should My iPhone Say Verifying Update?

Unfortunately, there’s no one-size-fits-all answer for this question. It can take your iPhone a few seconds or a few minutes to verify an update depending on a variety of factors, such as the size of the update and your connection to Wi-Fi.

The last time I updated my iPhone, it only took about ten seconds to verify the update. I’ve seen some readers say it has taken their iPhone as long as five minutes to verify an update. 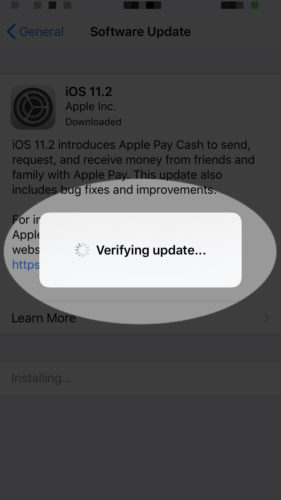 However, if your iPhone has been stuck on “Verifying Update…” for more than fifteen minutes, it’s pretty likely that something has gone wrong. The steps below will help you fix the problem when your iPhone is stuck verifying an update!

This step is especially important because you can’t always update your iPhone using cellular data. Larger and more significant updates (such as iOS 15) almost always require using Wi-Fi instead of cellular data.

When an iPhone gets stuck verifying an update, it’s possible that it froze due to a software crash. To fix this, hard reset your iPhone, which will force it to turn off and back on.

The hard reset process varies depending on the model of iPhone that you have:

After hard reseting your iPhone, go back to Settings -> General -> Software Update and try to download and install the software update once again. If your iPhone gets stuck on “Verifying Update…” again, move onto the next step. 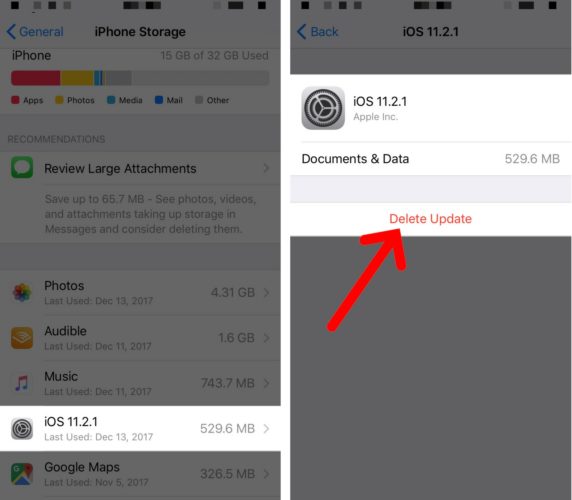 If you’ve tried all of the steps above, but your iPhone is still getting stuck on “Verifying Update…”, there may be a much deeper software issue causing the problem. By performing a DFU restore, we can attempt to eliminate a deep software problem by erasing and reloading all of the code on your iPhone. Check out our in-depth article on how to perform a DFU restore on your iPhone!

The software update has been verified on your iPhone and you can finally install the latest version of iOS. If your iPhone gets stuck verifying an update again, you’ll know exactly how to fix the problem. I look forward to hearing from you in the comments section below — feel free to ask any other questions you have too!

My iPhone 12 has been saying “Certifying Update” for 12 hours. I can not use it. What can I do please?

Sorry, it’s “verifying” not “certifying”.
Now, I can not use the cellular data and it should connect only to Wi-Fi
What can I do?

Did you do the hard reset? There are I instructions on it if you scroll up. If this doesn’t work the first time you do it then just try until it works!

I’m having the same problem. It’s been a full day I can’t even turn mine off.

I can’t even access my iPhone. Nothing is working. Just stuck on verifying for more than 10 hours.

do a hard reset there are instructions for your phone type

Great step by step – this fixed the problem. Greatly appreciated.

Thank you! Totally worked when I was trying to fix my mom’s phone

Amazing! I’m glad that you got it working!

i have managed to get on the screen that gives you the options to slide power off, medical ID, etc. and I can press the slide off button. I have a IPhone XR and I don’t know where or what the Lock Screen button is. Help!

thank u so much for the help it worked!!!

You can try restoring your iPhone through a wired connection with iTunes or do a DFU restore!

Hello. My iPhone 11 has been saying verifying update for several hours now, and nothing happens, when I touch the screen, so I can’t turn the phone off or try connecting to a better WIFI.

Hello. My iPhone 11 has been saying verifying update for several hours now, and nothing happens, when I touch the screen, so I can’t turn the phone off or try connecting to a better WIFI.

That is happening to me how did you fix it?

volume up, volume down, hold the lock screen button. It didn’t work for the the first couple times, keep trying.

Thanks Emily. That fixed my new Ipad Pro!

Did anyone fix this issue?? How??

Did that work? If I hold too long the SOS starts to light up so I stop it.

My phone (iphone 11) has been saying verifying update for 4 hours now! I would do the steps, but if i tap on something, it wont do anything.

love u bro <3, it works thanks

hello.my i phone is still verifying update and its almost one day OmG! hOW CAN I FIX THIS?

Have you tried deleting the update in iPhone -> General -> iPhone Storage? It shouldn’t be taking a full day to verify the update!

What did you do to fix it?

I had to restore to factory settings. Fortunately I did a backup just before I did the update so I was able to restore from my backup.

I followed the directions as written, however I do not see the iOS 11.2.1. Now I see 8 updates that were uploaded but the open button is not responding.. They also do not show up on my opening screen. This occured the morning after iOS 11.2.1 was thought to have been loaded. Help! I am missing a lot of apps I use daily!
Thanks again for being here!