You are here:Home»iPhone»My iPhone Cable Is Hot! Can A Hot Lightning Cable Cause Damage?

This blog post is inspired by a comment posted by Uwais Vawda on my article called “Why Does My iPhone Battery Die So Fast?”. His question was this:

“I’ve recently seen a video that shows the top five things that could kill your iPhone and they mention that if your charging cable has little bulges close to the ends it could harm your phone. You were a technician at Apple. Would you know whether this is true?” (edited)

I saw cables in all conditions as an Apple technician. We use our iPhone cables in all sorts of environments. New puppies, kids, the weather, and a plethora of other causes and conditions lead to some pretty mangled cables. It’s not always someone else’s fault – sometimes cables just, well, break.

Among all the types of damage I saw, the most common was a frayed cable near the end that connects to your iPhone. I also saw plenty of cables like Uwais described in his question, with a bulge at the end.

Why Do Lightning Cables Bulge When They Overheat?

Can A Frayed Or Bulging iPhone Cable Harm My iPhone?

In short (pardon the obvious pun), no – except one condition I’ll discuss in a moment. It’s only in the rarest of occasions a defective cable can harm an iPhone. That’s because your iPhone’s charging port is quite resilient to all but water damage, and when the cable shorts out, it does so inside of the cable, removed from the iPhone itself.

A Short? Can’t That Fry My iPhone?

When people hear “short”, it’s easy to imagine a huge amount of electricity zapping your iPhone’s logic board and the whole thing going up in smoke. If your iPhone were plugged directly into the wall, this might be a possibility – but it isn’t.

Remember that the amount of power flowing into an iPhone isn’t regulated by the cable, but by the 5 volt power adapter connected to the wall or the USB port on your computer (also 5V). The cable can short out all it wants, but it’s impossible for it to deliver any excess charge that might “zap” your iPhone.

What’s The Exception To The Rule?

There is one exception where an iPhone USB cable can cause damage to your iPhone, but it has nothing to do with the cable. Customers often brought me iPhones with signs of scorching in and around their iPhone’s charging port. In every case, close examination revealed corrosion inside the port. 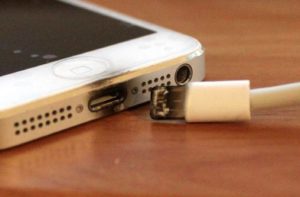 The exception is this: If your iPhone is water-damaged, then any USB cable, defective or otherwise, can damage your iPhone. That’s because the short now occurs not in the lightning cable, but inside of the iPhone itself. When the inside of the iPhone overheats, it causes damage to the battery, and the chemical reaction that takes place when an iPhone battery overheats can be all but explosive.

As an aside, all Apple genius rooms have a little firebox inside of them — if an iPhone or Mac battery is overheating, throw it in the box and shut the door! (In all my time at Apple, I never had to do this).

What’s The Verdict? Can A Defective Cable Actually Damage My iPhone?

I never saw it. When an iPhone cable overheats, it does so inside of the cable, too far away from the iPhone to cause any real damage. The only exception, as we discussed, is when the lightning cable overheats inside your iPhone, in which case it’s really not the cable’s fault at all, even if it may appear to be.

If it’s your iPhone that gets hot, it could be another issue entirely. Check out my article, “Why Does My iPhone Get Hot?” to learn more.

Don’t get me wrong: I’m certainly not saying that people with defective cables should continue using them indefinitely. If you want a great lightning cable for less than half the cost of Apple’s, check out these AmazonBasics lightning cables. You wouldn’t want the cable to continuously overheat and burn you or something else. But damage your iPhone? I think not.

All the best and thanks for reading,
David P.

I experienced, what I believe to be, a shorted iPhone cable. The cable was plugged in to a third party, 12-volt, USB car adapter. No device was connected to the iPhone cable. Without warning, a strong, burnt odor began to fill the cabin of the automobile. This was rapidly followed by smoke emanating from the USB adapter. I quickly removed the 12-volt adapter from the car’s power plug. Thinking the problem was in the 12-volt adapter, I used the iPhone Lightening cable with an Apple cube adapter in an attempt to fully charge my AirPods 2nd Generation device. Instead of… Read more »

I have an iPhone 6. It was turned off and charging overnight. In the morning the part attached to the phone was extremely hot, the phone was not that hot though. I noticed the battery wasn’t fully charged and I also noticed the charger cable was fayed close the phone attachment. When I tried to charge the phone again it would no longer charge no matter what charger cord/block I used, I even tried the using the computer. Apple tested and said it has an electrical problem and the phone is useless. A 3rd party repair shop replaced the charge… Read more »

I have a lightning connector that is one of three on a multi-charge cable.
Even when the lighning connector is not in use but the cable plugged in the ligning connecter gets very hot. Why is this happening if it is not drawing power?

There was the warping and a hole in the side of the cable on the part just below the lightining connector.

Power was out in my house when I woke up, IPhone wouldnt turn on…. At all … Two days still bricked ended up taking it to Apple Authroized seller and they said they send it to apple see if can get fixeed or replaced….
REALLY hoping they dont Rejects it for some reason.