You are here:Home»iPhone»Display»My iPhone Touch Screen Is Not Working! Here’s The Fix.

There are a lot of reasons why your iPhone touch screen might stop working. Thankfully, there are also a lot of ways to fix those problems.

Why Is My iPhone Touch Screen Not Responding?

The first thing we need to do is figure out why your iPhone touch screen. Usually, the problem is caused when the physical part of your iPhone’s display that processes touch (called the digitizer) stops working correctly or when your iPhone’s software stops “talking” to the hardware the way it should. In other words, it could be a hardware or a software problem, and I’ll help you with both in this article.

Troubleshooting iPhone software problems typically doesn’t cost anything. It’s also easier than prying off your screen with suction cups (please don’t do this). For this reason, we’ll start with the software fixes and move on to fixing the physical problems if you have to.

A note about drops and spills: If you’ve recently dropped your iPhone, odds are a hardware problem is to blame for your touch screen trouble — but not always. Slow apps and problems that come and go are usually caused by software problems.

If your touch screen works sometimes, keep reading. If it doesn’t work at all, skip to the section below called When Your iPhone Doesn’t Respond To Touch At All.

iPhone touch disease refers to a series of problems that primarily affect the iPhone 6 Plus. These problems include a gray, flickering bar at the top of the display and issues with iPhone gestures, such as pinch-to-zoom and Reachability.

There’s some debate over what causes iPhone touch disease. Apple claims it’s a result of “being dropped multiple times on a hard surface and then incurring further stress on the device.” They’re aware of the problem and have a specific repair program if you’re experiencing this issue with your iPhone. iFixIt opened up the iPhone 6 Plus and discovered what they call a “design defect.”

Regardless of what’s really causing the problem, you can take your iPhone into Apple and get it fixed for a $149 service fee.

Does your touch screen stop responding when you use a certain app? That app may be to blame. Try uninstalling and reinstalling it. To uninstall an app:

If your iPhone touch screen is not working after you’ve reinstalled the app, send a message to the app developer. They may have a fix for the problem or be working on a solution already.

How Do I Send a Message to the App Developer?

It’s rare, but occasionally iPhone software updates can cause touch screen issues. The most recent documented case of this happening was Apple’s iOS 11.3 update. The problem was quickly fixed by a subsequent Apple update.

Open Settings and tap General -> Software Update. Tap Download and Install if an iOS update is available on your iPhone. 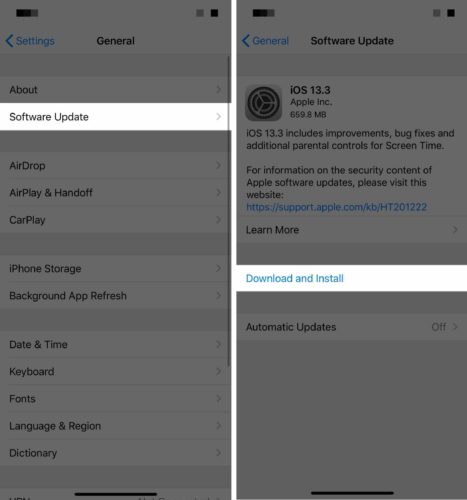 When Your iPhone Doesn’t Respond To Touch At All

Touch screen problems that happen in multiple applications or when you don’t have an app open may be caused by problems with the iPhone’s software. A good first troubleshooting step is to power your iPhone off and back on again, but it’s hard to do that when your touch screen doesn’t work! Instead, we’ll need to do a hard reset. Here’s how:

If your iPhone won’t turn off in the normal way — or if turning your iPhone off and back on again doesn’t solve the problem — try doing a hard reset. To do this, hold the Power and Home Buttons down at the same time. Wait several seconds, until the Apple logo appears on the screen, and then let go.

On an iPhone 7 or 7 Plus, a hard reset is performed by pressing and holding the power button and volume down button together for several seconds until the you see the Apple logo appear on the display.

A hard reset abruptly stops all of the background processes on your iPhone and can cause software issues. It usually doesn’t, but it’s a good idea to only do a hard reset when you need to.

Is your iPhone touch screen still giving you problems? It might be time to try restoring your iPhone to its original settings. Before you do this, be sure to backup your iPhone. You can do this by plugging your iPhone into a computer and running iTunes (PCs and Macs running Mojave 10.14), Finder (Macs running Catalina 10.15), or using iCloud.

I recommend performing a DFU (Default Firmware Update) restore. This type of restore is a bit more thorough than a traditional iPhone restore. To do this, you’ll need your iPhone, a cable to plug it into the computer, and the most recent version of iTunes.

When Your Touch Screen Hardware Is To Blame

If you’ve dropped your iPhone recently, you may have damaged the screen. A cracked display is one of the most obvious signs of a damaged screen and can cause all sorts of issues with the touch screen.

A drop can also loosen or damage the delicate under-layers of your iPhone touch screen. What you see and put your hands on is just one part of the touch screen. Underneath, there’s an LCD screen that creates the images you see. There’s also something called a digitizer. The digitizer is the part of the iPhone that senses your touch.

When iPhones get dropped, the tiny cables that connect to your iPhone’s logic board can become dislodged just enough for the touch screen to stop working, even if there’s no physical damage. It’s a longshot, but you may be able to fix your iPhone’s touch screen by pressing down on the part of the display where the cables connect to the logic board. 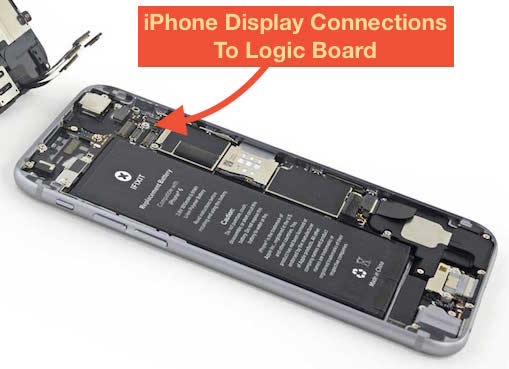 Warning: Be careful! If you press down too hard, you could crack the display — but this may be one of those “nothing left to lose” situations, and it has worked for me before. 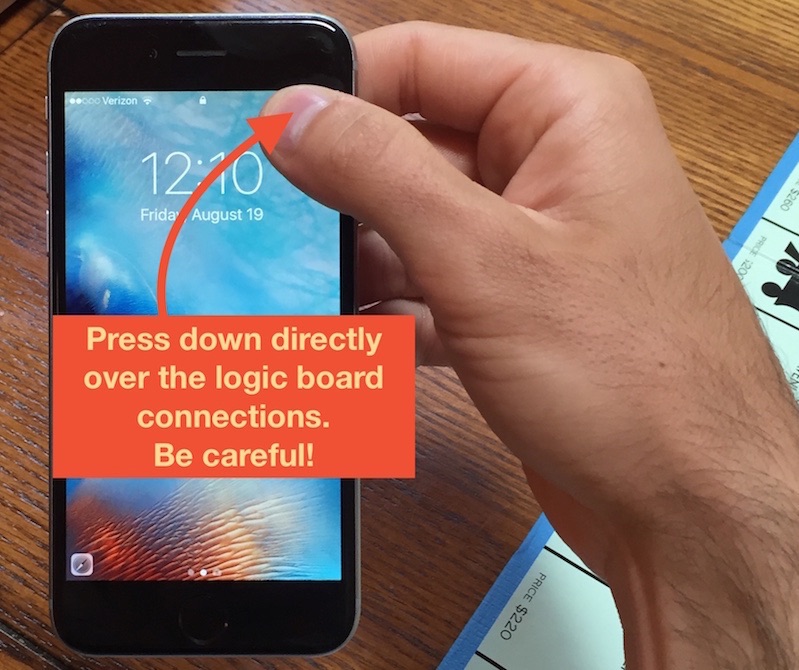 If your iPhone touch is not working because it’s completely broken, you could order a kit and try to swap out the parts yourself, but I wouldn’t recommend it. If something goes wrong and you’ve replaced any part of your iPhone with a non-Apple part, the Genius Bar won’t even look at your iPhone — you’ll be on the hook for a brand new iPhone at full retail price.

The Genius Bar does a great job with broken displays, but they charge a premium for their service. Make sure to schedule an appointment first if you decide to visit the Apple Store.

Once the damaged pieces are replaced, your iPhone touch screen should work like new. If it doesn’t, the software is probably to blame.

Purchasing a new iPhone is another good option. Screen repairs on their own typically aren’t too expensive. However, if multiple components broke when you dropped your iPhone, they’ll all have to be replaced. Your simple screen repair could turn into something much more expensive. Investing that money in a new smartphone might be the more cost-effective solution. Check out the UpPhone phone tool to compare every cell phone and how much they cost on every wireless carrier.

Back In Touch With Your iPhone

I'm Valerie Lauer, a writer, editor and tech enthusiast. I believe in channeling my technical support powers for the greater good, creating helpful how-tos and making life with your smartphone easier.

Hi. I did the DFU restore and my iphone is still unresponsive to touch. What to do now?

If you completed a DFU restore successfully and your iPhone still won’t respond to touch, there is a deeper hardware problem with the device and you’ll need to get it repaired or replaced. Reach out to Apple and see if they’ll offer you a replacement. If your device is older than an iPhone 8, I strongly suggest you check out your upgrade options so that you can get the latest hardware and software support!

When buggie software causes me to lose touch screen control altogether – can’t swipe anything or turn off. A consistent works-every-time fix for me has been to hit the sleep/wake button to sleep it, then again to wake it and all is well. iPhone 6.