You are here:Home»iPhone»Sounds»iPad Volume Buttons Stuck Or Not Working? Here’s The Real Fix!

The volume buttons on your iPad aren’t working properly and you’re not sure why. You’re having trouble adjusting your iPad’s volume and it’s beginning to get frustrating. In this article, I’ll explain what to do when your iPad volume buttons are stuck or not working!

Use The Volume Slider In The Settings App

When the volume button isn’t working you can still adjust the iPad volume in the Settings app. Go to Settings -> Sounds and drag the slider to your desired volume. The further you drag it right, the louder your iPad will play sounds. 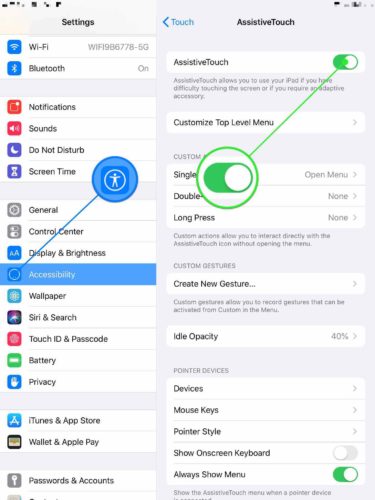 Once the button appears, tap on it and tap Device. Here, you’ll see the option to turn the volume up or down.

The volume slider in Settings and AssistiveTouch are both temporary fixes for a problem you probably want to have permanently resolved. Before we can fix the problem, you first have to figure out which type of volume button you’re dealing with. There are two unique problems:

Since these are different problems with a different set of fixes, I’ll address them one at a time. I’ll start with scenario 1, so if scenario 2 represents your iPad’s problem, you can skip down a little.

The iPad Volume Buttons Are Stuck!

If the volume buttons are still stuck after you take off the case, you’ll probably have to have your iPad repaired. Skip down to the “Repair Your iPad” section to learn about your best repair options!

When I Press Down The Volume Buttons, Nothing Happens!

If nothing happens when you press down the iPad volume buttons, then they might not need to be repaired. It’s very possible that you’re iPad is experiencing a software issue.

First, try hard reseting your iPad, which will force your iPad to quickly turn off and back on. If the volume buttons aren’t working because of a software crash, this will fix the problem.

Sometimes you have to hold the button or buttons for 25 – 30 seconds, so be patient!

If the volume buttons still aren’t working once your iPad turns back on, move onto to our final software troubleshooting step: the DFU restore.

Put Your iPad in DFU Mode

DFU stands for Device Firmware Update and it’s the deepest type of restore you can do on an iPad. It’s important that you perform a DFU restore, not a regular restore because a DFU restore updates the firmware — the code responsible for controlling the hardware of your iPad. Check out our video on YouTube to learn how to put your iPad in DFU mode and restore!

If a DFU restore didn’t fix or your iPad, or if its volume buttons are still stuck, you’ll have to get your iPad repaired. If you plan on taking your iPad into your local Apple Store, we recommend scheduling an appointment first so you don’t have to wait around.

Turn Up The Volume!

Previous ArticleiPad Battery Problems? Here’s What To Do When It Drains Fast!
Next Article iPad Speaker Not Working? Here’s The Real Fix!

My iPad Volume button is stuck.

Thanks. Resetting my iPad worked.

Cheap case was jamming the button. Thanks

I did the hard reset for my volume buttons and it worked! Thanks!

My I-pad volume up button will not increase the sound, but the down button will lower it, it is very low now, but going into settings I can lower the volume, but not raise it. the local apple store gave me a price of $125.00 to replace the volume up button, is that reasonable? it’s almost half of what a new one would cost.

Same here. I get around it by pulling down on the screen from the top in the upper right corner area and a pull down box appears. In the middle right of that box is a volume bar and you can control volume with that.

My sons new iPad mini I got him for Easter volume buttons at sticky and the volume will either stay really loud and not long at all, I try pushing on them and playing with them but nothing’s working to make the sound back to how easy it was to use before! Help please! He’s getting so frustrated with it!

My volume down button not working. My IOS version is 14. Have anyone issue of like this?

I have it but I just got used to using the slider in the control center.

Hello, I just purchased an iPad 7 and I am setting it up now. No matter what I do I cannot get the sound to work, Can you help?

Assistive Touch works great! Thanks for the information, David. It is no more difficult to use the Assistive Touch button than the volume button on my ipad.

Hi David, thanks for your advice. It didn’t fix the broken volume-lowering button!, but has allowed me to control this with touch assistance. I’m very grateful.

I am able to turn it up but I can’t turn it down what do I do?

Same! It so annoying. Try taking of your case, or your device might need to visit the repair shop.

I have an iPad Pro. The volume will increase with the slightest touch. And some times it will increase all on its own. There are some occasions when I try to turn the volume down it will try but the volume up continues to attempt increasing the volume

Do you have a case on your iPad? That might cause your iPad volume buttons to be stuck or not working.

I have the same problem. any solution you found

My iPad is broken I think, when I touch the turn down button it turns the volume all the way down. And this is with just the slightest touch. What do I do?

Sounds like there’s an issue with the volume button contacts. I recommend you have it serviced to see if they can fix the contacts. You shouldn’t need to get a whole new device unless there’s a larger underlying issue.

thank you i did a restart and its fixed

My iPad 5 power and volume button is not working after I replaced my digitizer. I I did a soft reset