You are here:Home»iPhone»My iPhone Won’t Rotate. Here’s The Real Fix!

You’re turning your iPhone sideways, but the screen won’t rotate. It’s a frustrating problem, but don’t worry: The solution is just a swipe and a tap away. In this article, I’ll explain why your iPhone won’t rotate and how to fix the problem.

Why Won’t My iPhone Rotate?

How Do I Know If Portrait Orientation Lock Is Turned On?

Some older iOS updates used to display a small lock icon in the upper right corner of the screen to indicate that Portrait Orientation Lock was turned on. However, newer iPhones and iOS updates no longer display this detail from the home screen.

Instead, you need to open the Control Center to monitor and adjust your Portrait Orientation Lock. Keep reading to learn exactly how to do this!

How Do I Turn Off Portrait Orientation Lock On My iPhone? 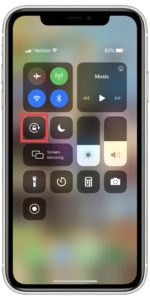 If you use an iPhone X or later, the process to open the Control Center is a little different. Swipe down from the top right corner of your screen. You should see a number of buttons here. Tap the one that looks like a lock surrounded by an arrow to turn the Portrait Orientation Lock on or off.

Just like your printer paper, your iPhone’s display has two orientations: Portrait and landscape. When your iPhone is held upright, it’s in portrait mode. When it’s on its side, it’s in landscape mode. 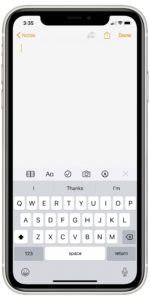 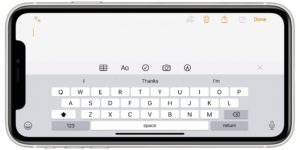 If Portrait Orientation Lock is turned off and an app isn’t rotating, it may not support landscape mode. I have seen cases, however, where an app won’t rotate because it crashed. If you think that may have happened, close out your apps, reopen the problem app, and try again. I’ve also written an article about why despite what you may have heard, closing out your apps is absolutely a good idea.

When Should I Use Portrait Orientation Lock?

I’ve also found it useful when I’m showing pictures to my friends. As I’m astounding them with photos of my adventures, they often become ill and excuse themselves – due to the rotating screen, of course. With Portrait Orientation Lock turned on, I can entertain them for hours on end.

Whether you’re watching a movie, listening to the Beach Boys, surfing the web, or you like to type using the keyboard in landscape mode, it’s always annoying when your iPhone screen won’t rotate. Now that you know why it happens, you’ll never struggle with Portrait Orientation Lock again.

Previous ArticleMy iPhone Won’t Play YouTube Videos! Here’s Why & The Fix.
Next Article What Do To If Your iPhone Has A Gap Between The Screen & Frame

Thank you so much. You were right.

It is really helpful for me! Because once my iPhone can’t rotate videos, I will use HD Video Converter Factory to rotate videos on PC, then transfer them to my iPhone. But it is also a good tool for rotating and converting videos.

Thank you so much!

Awesome! Thanks so much!! 🙂

Thank you so much. Guess my grandson hit that button.

I must’ve hit it when in Control Center, and wasn’t aware I honked it up….THANKS!!

Thank you. Clear and easy instructions. I would never have worked it out!

Thanks, after many recommendations on web, only this worked immediately.

Thank you so much I got it

Thank you! Solved in 5seconds!

Thanks! It works now

Thanks. Now I can rotate my phone.

Thank you so MUCH! My phone was messed up for days and I tried the zoom crap that Google tells you to do and it doesn’t fix the rotate issue just gives you a headache cuz your apps are to magnified on your screen..,

My rotation lock is off and my iPad still won’t rotate. I tried rotating in Safari browser and on the home screen, and it won’t work. I use lock orientation occasionally, but this time after disabling it, my iPad stopped responding to being rotated. I’ve enabled and disabled it multiple times to no avail.

Thanks so much. I tried other sources. Yours was easy, simple..

Dude, life saver. Work help desk told me to do a Factor Restor. Luckily I always check one more time.

You are a lifesaver!! Thank you!