You are here:Home»iPhone»Sounds»iPhone Volume Buttons Not Working? Here’s The Real Fix!

Are The Buttons Stuck, Or Can You Press Them Down?

Here are the first questions you need to ask yourself when your iPhone volume buttons are not working:

Each problem has a unique set of troubleshooting steps, so I’ll break this article down by addressing each question one at a time.

Use The Volume Slider In The Settings App 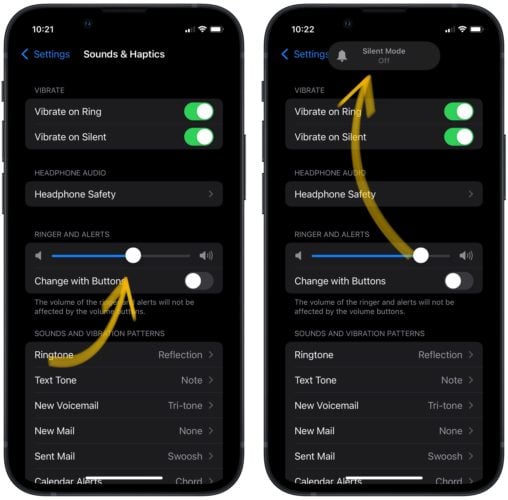 My iPhone Volume Buttons Are Stuck Down!

If they’re still jammed, you’ll probably have to get your iPhone repaired. Scroll down to the bottom of this article to explore your volume button repair options!

If the volume buttons are stuck and you can’t get your iPhone repaired anytime soon, you can use AssistiveTouch! AssistiveTouch puts a virtual button on your iPhone’s display which has a lot of the same functionality as the physical buttons. 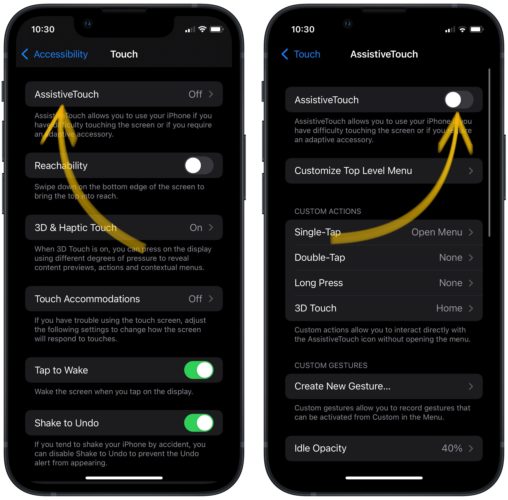 To use AssistiveTouch as a volume button, tap the virtual button and select Device. You’ll see an option to adjust the volume up or down, just like you can do with functional volume buttons! 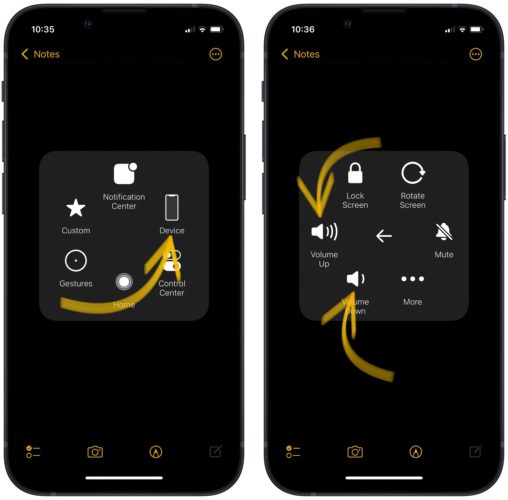 I Can Press Down The Volume Buttons, But Nothing Happens!

There are a few different ways to hard reset your iPhone depending on which model you have:

It can take a full minute or more for your iPhone to begin a hard reset, so make sure you keep holding each button until you see the Apple logo.

Turn On Change With Buttons

If you’re trying to increase or decrease the ringer volume on your iPhone using the volume buttons, make sure Change with Buttons is turned on. If this setting is off, the volume buttons will only adjust the volume for things like music, podcasts, and videos when played through headphones or your iPhone’s speakers.

Go to Settings -> Sounds & Haptics and turn on the switch next to Change with Buttons. You’ll know it’s on when the switch is green! 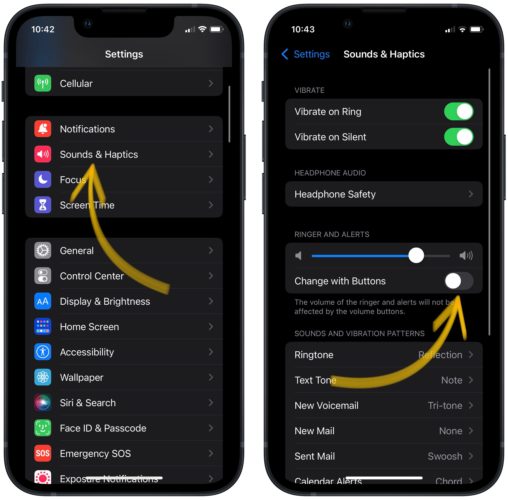 Put Your iPhone Into DFU Mode

A DFU (device firmware update) restore is the deepest type of restore you can perform on an iPhone. The “F” in DFU restore stands for firmware, the programming on your iPhone that controls its hardware. If the volume buttons aren’t working, putting your iPhone in DFU mode could fix the problem!

If the volume buttons still won’t work after you’ve performed a DFU restore, you’ll probably have to get your iPhone repaired. On early iPhones, broken volume buttons weren’t too big of a deal because all they did was adjust the volume. Now, volume buttons are much more important because they’re used for things like hard resets and screenshots.

Your best bet for a reliable repair is to set up an appointment at the Apple Store near you and get you iPhone diagnosed by a licensed technician. Alternatively, you can reach out to Apple’s support team online, through the mail, or over the phone to find out what your repair options might be.

Turn Up The Volume!

Previous ArticleHulu Not Working On iPad? Here’s The Fix!
Next Article Invalid SIM On iPhone? Here’s Why & The Real Fix!

I’m having a weird problem with volume. I like to keep my volume all the way up to be sure to hear phone calls. Every time I pull it out of my back pocket, the volume is all the way down and I have to manually move it back up. I thought at first that the button was pushing on my back pocket, but turning the phone with the other side down in my pocket did not fix the problem. Any ideas?

Does fixing the battery require changing the entire metal casing? My battery had issues causing it to swell up and shortly after the volume buttons stopped working

Sometimes it does — it depends on if the casing is bent. And if the battery has swelled up to the point the insides of the phone are exposed, it’s likely there’s other damage too. I’d recommend making a Genius Bar appointment and bringing your phone into an Apple Store to let them take a look at it. Thanks for reading!

I recently replaced my battery and port on my iPhone 7 plus when I closed it back up my volume and mute button don’t work but my power button Works any reason why?

I noticed that I hit wrong letters in my email. I had to leave the room for a moment and just checked my phone and noticed my mistake. I was asking why my sound is very low when my buttons are turned up. can you please help me.

Took iphone 11 to get back screen fixed that was cracked. When I picked it up the back screen was fixed, but now the volume buttons on the side dont work? Phone worked brilliantly before. Help

I can’t make use of the phone at all.. can’t be using wireless earpiece for long . Advice me on what to do

My volume keys are not working and also the home button is very hard to press. but if i connect it with wireless bluetooth it will work.. i cant even pick a call at all. please help me i got the phone not quiet long.

Thanks for your article. Please add to it the following, which was my problem:

There is a hardware mute switch above the volume buttons, that had got moved. Moving it back solved the “problem”.

okay i tried the change with buttons thing, but it didn’t work for me. when i press my volume buttons, they simply do nothing. same with my ringer. i have the iphone SE (not the new one)

Thank you so much! The assistive button volume controller tip worked brilliantly for my stuck volume down button. How clever you are! No one else had mentioned such a use for that button and I have been googling on and off for some weeks!

I dropped my phone in water, now the volume buttons don’t work, I don’t know what to do now.

Water damage can sometimes only effect certain parts of your phone. Fortunately, if your volume buttons are not working due to water damage, you can get them fixed fairly easily. Here’s a page that might help you research your options.

I can’t unmute my phone! Help

The buttons not working but a few of ur steps helped me to hear music , videos etc aslong as I can hear that’s all that matters to me so I’m happy bt what is annoying me is the bar keeps popping up nd stayn thr

It’s a bit silly, but the phone cannot be put in DFU mode if the volume buttons does not work.

My iPhone X wont ring but all controls are set to what they should be and the dont not disturb button is not on the volume is turned all the way up and the slider is not set on silent….I dont know what else to do